....to say "hello!"  We're deep in the throes of play offs...two teams down, one team to go!  Our Varsity Girls are headed to the state Semi finals...so exciting!  We wrapped up Middle School basketball last week and this weekend we finished off with Jammer's 10U team.  They both finished well....not quite what everyone wanted, but that doesn't take away from amazing seasons. 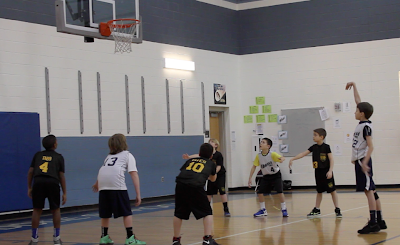 Jammer shooting free throws in round two of the playoffs.

I decided I'm done hoping for snow.  I packed away all my taunting snowmen.  They just sat there, reminding me of the fact that we haven't had any measurable snow since December.  Boo.  I've moved on.  I'm ready for daffodils and crocuses. 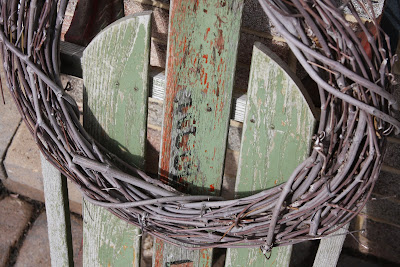 My wonderful family threw me a surprise party over the weekend.  I knew about it.  (I know it's shameful)    Last week on the way to church, John asked me to send an email for him to his team.  When he handed me his iPad to send the email, and I opened up the app and there was a blank email right on top that read "Re: Lisa's Surprise Party".  Stink!  I didn't want to know that.  There is nothing harder than trying to figure out when you're going to be surprised and then how you're going to act surprised when it happens. ...but it was still an awesome party with all of my favorite people (minus a few that couldn't make it :)).  I really had a wonderful time catching up with everyone and enjoying my awesome friends and family.   My dad even made it.  He decided to skip the post game show and high tail it back to Maryland for the party.  He does the color commentary for the WVU men's basketball team and they had a game on Saturday.  He missed just for me. 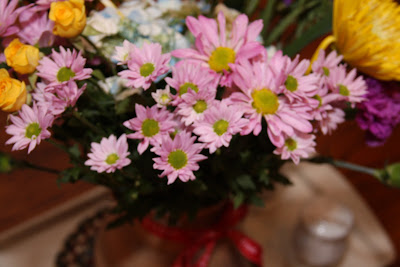 flowers at the party from my mother in law....I only got pictures after the party of the decorations

Reflecting on the party, I thought I was a pretty laid back wife...you know, compliant, easy going, flexible.  But this surprise party made me realize that I'm not quite as flexible as I might like to believe.  After Jammer's morning basketball game, we came back to the house and my husband suggested that he and I go out and do some shopping.  Hello!  West Virginia was playing at 2 o'clock.  I did not want to go shopping.  I wanted to stay home and watch the game.  The girls suggested that I DVR the game.  Hello!  Who DVR's sporting events?  Not me.  Just as I was about to be stubborn, it dawned on me that it was all about getting me out of the house.  So I said "Sure!"  And off we went.  We had a great time - just the two of us.  We actually listened to the broadcast of the game as we traveled to the outlets.  It all was great (well not the game...they lost).  But I knew that if it hadn't been for my suspicion about the party, I would have been less likely to agree to this interruption in my agenda.  Ouch!  So, I'm working on it....you know, being who I thought I was!  Trying to not hold onto my agenda...to allow myself to be open to change. 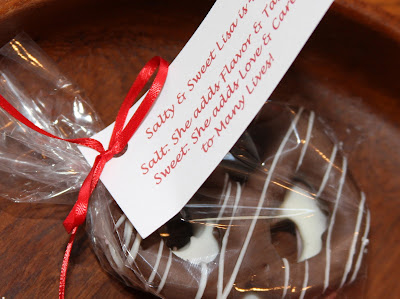 party favors from my mom for everyone at the party

It's been a good week....lots of basketball, plenty of love and surprises and a bit of stretching and learning on my part!  Hope your days are filled with all that makes you smile and that along the way, you grow, learn and keep on enjoying the blessings around you!

Posted by stitching under oaks at 3:03 PM

From All Stitched Up said...

Happy Birthday! Sounds like a great party. I love the party favors. Have fun with the end of basketball.

hmmm ... just poppin' in ... guess that sounds like me too. it has been too long since i stopped in at your little corner of the world wide, and it makes me sad to admit that. i have been a stranger in writing myself, and i guess the concentric rings of consequence from that means that i also have been a stranger in checking in on other writers i love. the party sounded great. i so wish we could have been there. what a sweet and intentional husband and family that honored and celebrated you that way. and i love the honesty in confessing that who you believe yourself to be, doesn't always come out that way in the actions of your everyday. i would say that goes ditto for me too. the white horse husband, father and friend that i desire to be, too often rides the other way, or falls off the horse on the way to something important. you know, like poppin' in on a really dear friend and their little corner of the world wide.

Happy Birthday again! Sounds like so much fun - and LOVE that your kiddos worked so hard to surprise you. Especially your sweet boy who had to go shopping!

Totally feel the same way about thinking i'm more easy going than i really am. These days i'm a bit obsessed with keeping the house clean and picked up at all times because it's really just one big room that's visible the minute you open the front door. However I have become more easy going on the weekends - trying to do whatever the family wants rather than all the 'fun' things i've planned! Love how much fun your family has together - and how much you all enjoy basketball season.
Big hugs to you and best wishes for a wonderful year!