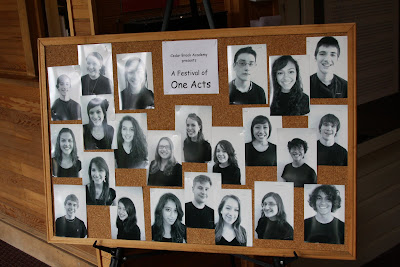 This past Saturday was Cedar Brook Academy's Mainstage Production.  This year was a One Act Festival. There were 4 stand alone scenes that made up the show.  The cast has been working on their characters and parts all school year.  Every Thursday that they have had class, they've run lines, worked on facial expressions, stage directions and fine tuning their performance.   Mrs. Abbott, their director is amazing in her ability to direct, encourage and bring to the surface these treasures that they all bring to the stage.  Saturday was their night to shine and they shone brilliantly! 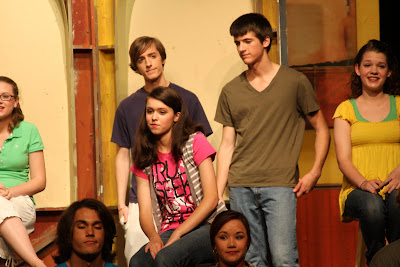 This was Maggie's first big production in a real theater with a serious (although comedic) production.  She was new to the group and not even sure she wanted to audition in the beginning.  Well, she couldn't have had more fun or stretched herself more than she did in this class.  She learned so much and made so many wonderful memories. 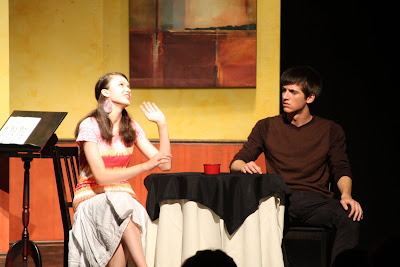 Her main role was a chatty girl on a blind date who had a penchant for talking with texting lingo.  lol!  It was hilarious IMHO.  As she rambled on during the night, her date was clueless as to what she was saying.  jk!  He insulted her by asking if it was appropriate to talk in letters (frowny face!) and she promised to get him blacklisted from all the social dating sites! 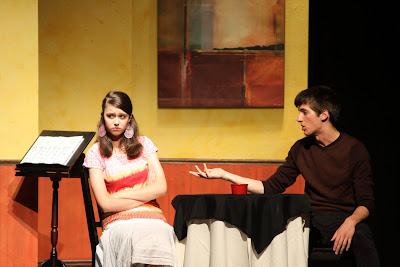 BTW,it's even funnier because Maggie doesn't even have a texting plan in real life!  She did a wonderful job nailing her character and timing her lines perfectly with such humor and expression.  And those earrings...wow! 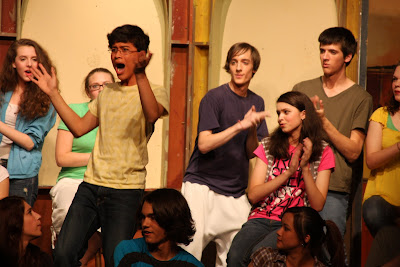 All the cast and crew performed their roles wonderfully and with a packed house for both shows, they received thunderous applause.  After the show was over and the set was packed up, we headed to ihop to ring in the morning.  (whew!  this is when I wished she had her own driver's license) 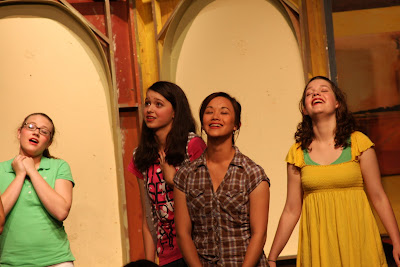 The cast party was yesterday and the programs were all signed and hugs were all given...now we settle into a calmer (although much less exciting) schedule.  Thanks to everyone who supported Maggie.  She was so blessed to have so many friends and family come to the show or offer their encouragement to her. 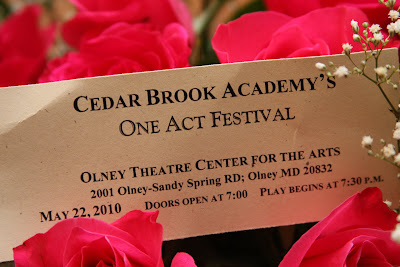 Posted by stitching under oaks at 9:09 AM 18 comments:

Labels: family, glimpses of us, school 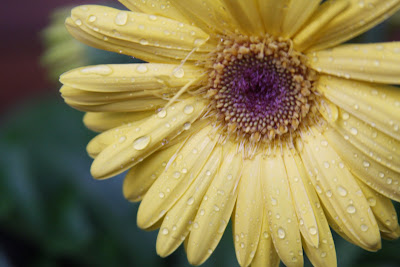 I'm not a little bit at a time kind of gal.  I like to get things done and checked off of my list.  Once I get a plan in mind, I'm all about getting it to the finish line.  This can be good and this can be bad.  It's good, because things tend to get done around here, but it's bad because sometimes I don't enjoy the process as much as I could.  I tend to miss out on the beauty of the scenic route while I've got the pedal to the medal and my check list in hand.  I'm slowly learning to work bit by bit.  I am working on enjoying the process and taking the time to reflect and rest in the midst of a project. 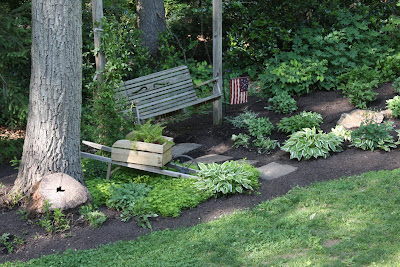 This weekend the girls and I unloaded two truckloads of mulch and dressed several of our beds. (They were a huge help!!  Thanks girls!) We still had energy left (OK...I still had energy left) and there were still plenty of beds left to mulch, but I'm proud to say that I made the decision to stop after those two truckloads.  John even offered to go and get me a third load of mulch before he and John Samuel headed off to a ball game...but I declined.  I knew that even though we didn't finish, we had done enough for the day. 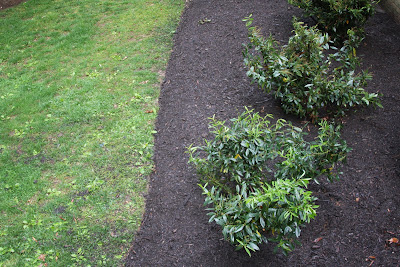 I was so proud of myself and the purposeful way I called it quits. After my shower, I sat on the deck and enjoyed the rest of the afternoon, reading and knitting (and throwing in a load of laundry or two!).  We'll be back at the mulching again soon, but in the meantime I'm learning to enjoy the process. 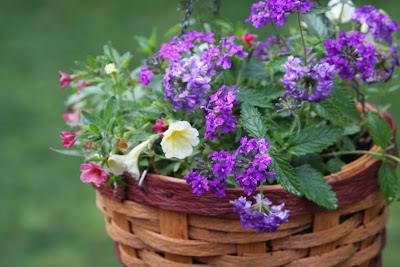 How about you?  Do you have a 'bit by bit' or a 'git-er-done' kind of approach when you've got projects that need tackling?
Posted by stitching under oaks at 8:32 PM 18 comments:

It's been a busy week and a half around these parts....too much to do and not enough hours in the day to get it all done.  I'm not complaining, just statin' the facts.  One would think that as the school activities and classes wind down, life would as well.  But this winding down has not been evident in our neck of the woods....I think a vortex has occurred that has actually increased the dynamic speed of our lives.  However fast life's been coming, it's all good as we've been:
*enjoying the new colors and blooms around the house 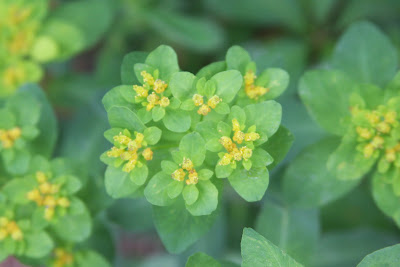 * photographing graduates as they prepare for the future 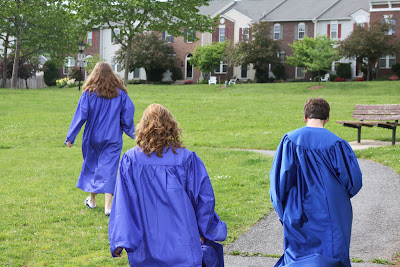 *having lunch with a special friend in a beautiful setting 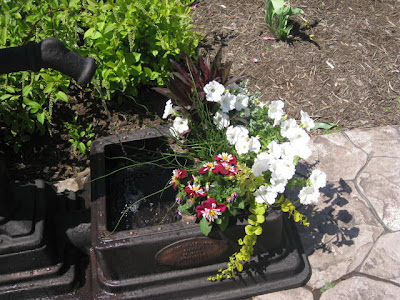 *watching my guy perform at the final CBS class day....he actually talked in the microphone...he did great! 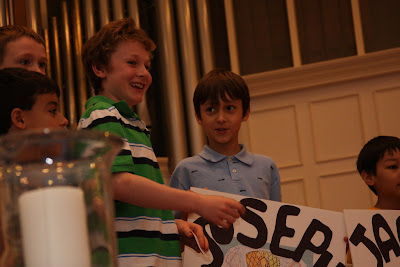 *planning and planting new beds as the past winter was really hard on my rhodies...(more pictures later) 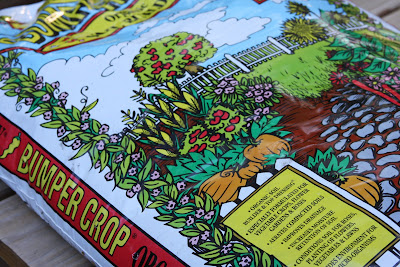 *getting away with my honey for a weekend of planning & recharging 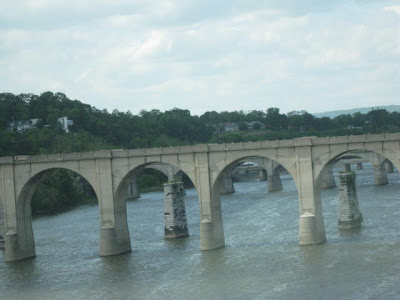 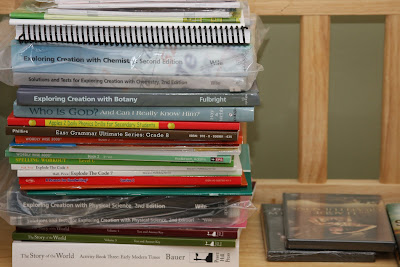 *celebrating mother's day with my favorite moms and girls 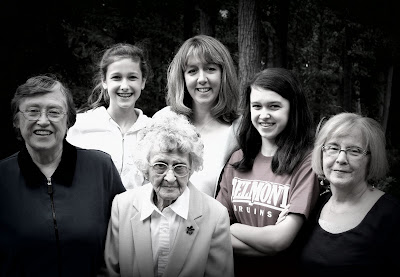 I hope things in your neck of the woods find you enjoying all that life throws your way! No matter how slow or fast it's coming at you....enjoy every moment. 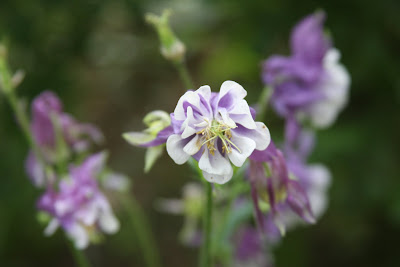 Posted by stitching under oaks at 7:44 AM 15 comments:

the trouble with tribbles 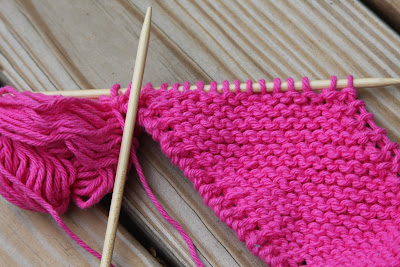 I've been in between knitting projects and while waiting to find the perfect project to start, I started knitting Tribbles. I had some leftover cotton yarn and the Tribble pattern was the perfect way to use up all those little dribbles of yarn. 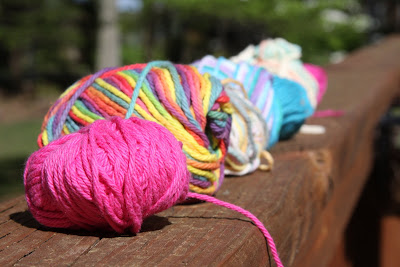 Tribbles are little poofy scrubbies.  You could use them for pots or people...whatever needs scrubbing.  They are a mindless little knit and the satisfaction of completing a finished project is very quickly realized! 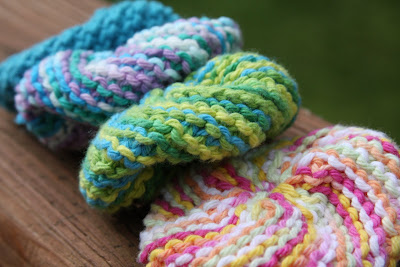 I think these would make nice little gifts with a pretty bar of soap or some fancy bath gel.  The pattern is free so go ahead and get started making some yourself...only be warned...the trouble with Tribbles is that you can't just knit one! 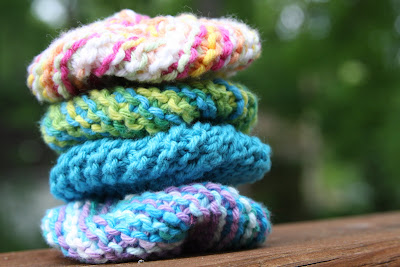 Although, I may have found the perfect cure for my Tribble trouble.... 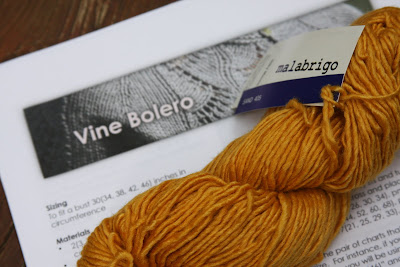 Posted by stitching under oaks at 7:59 PM 17 comments: