I tried to come up with a clever title.... 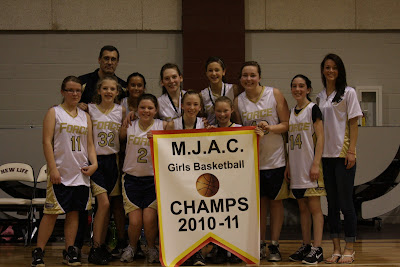 The Middle School girl's team that Mckenzie plays on and that John coaches finished their season with a conference record of 17-0 and a banner for winning playoffs.  It was a great season.  Not just because they had a winning record, but because they made new friends, worked together as a team through good and bad times and they shared the good news everywhere they went. 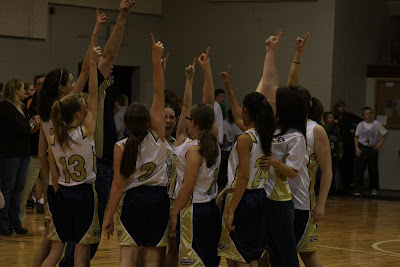 They really were a FORCE this year.  Mckenzie was named to the all-tournament team and I think she was as surprised as anyone when they called her name.  She played great this year and I couldn't be more proud of her than I was when I saw her reach down and help another player from another team up off the floor.  She's got guts of steel and a heart of gold. 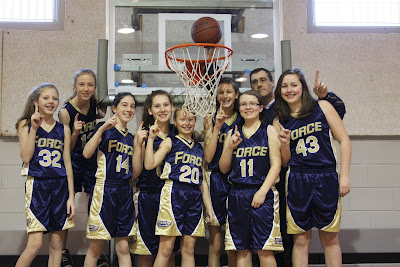 And my vote goes to Coach Quick for Coach of the Year!  I figured out that he's coached 36 middle school games this season.  That's a lot of jump balls!  Anyways, I'm so proud of both of them.  They are both winners in my book!
"But we have this treasure in jars of clay to show that this all-surpassing FORCE  is from God
and not from us."
2 Corinthians 4:7
Posted by stitching under oaks at 3:27 PM

Labels: family, glimpses of us, sports

Congratulations to Mckenzie and Coach Quick and the whole team! Having lived through three student athletes I know what an amazing accomplishment an undefeated season is. Way to go!!

That is so awesome! Congrats!

Great playing Kenzie!! Congratulations on an awesome season! He surely blessed you. And to Coach...while the record is impressive, what you taught them about being young women is far more lasting.

Wow! How great for all of you!
Blessings,
G

I know where that heart of gold comes from....The apple doesn't fall far from the tree in this case!

Congrats on a great season! On to March Madness!

Congratulations to all of you who make up such an awesome winning team! Jodi said what i was thinking but it bears repeating that your girl takes after you with the guts of steel and heart of gold! And i'd like to nominate you for the biggest supporter, loudest cheerer, and best ever dinner on-the-go maker - kinda like the force behind the FORCE.

From All Stitched Up said...

Congratulations to all - Undefeated is awesome.

Oh Congratulations and how much fun!

Congratulations!! How exciting for her.

How fun to be on the winning team! I'm sure they all had such great fun.

Hey, I'll be sure to let my daughter know you offered to puppy sit. I have a feeling she will be calling you! LOL!

I love the name "Coach Quick"! Well done to them all.

BIG congrats to the girls... that is VERY exciting! :o) Happy Days ((HUGS))